Can a non-passerine bird adjust its song according to noise?

The technological advances developed in recent decades together with improvements in transportation methods (for both people and goods), and the appearance of transversal communication networks that facilitate access to previously isolated areas, are turning silence in natural and rural soundscapes into a rare treasure. This process is causing substantial changes in the acoustic environment of terrestrial and aquatic ecosystems, turning the attention of scientists towards how animals respond to this emerging anthropogenic impact.

Because of the global nature of processes like agricultural intensification, urbanization and infrastructure expansion, agro-ecosystems are increasingly impacted by anthropogenic noise. These habitats, which in Spain cover about 25 million hectares, have always harboured rich bird communities. Nowadays, farmland birds are the most threatened bird group in Europe.

The Little Bustard Tetrax tetrax is a flagship species linked to agricultural systems that has dramatically declined in the last 20 years (the Spanish population has halved between 2006 and 2016). It is a relatively large non-passerine bird, sexually dimorphic in both plumage and size, whose males form dispersed leks during the breeding season, where they defend a fixed territory from other males. Little Bustard males perform sexual displays that include scratching and jumping on the ground, accompanied by noisy flapping and snort calls, the only vocalizations that males make when displaying.

The aim of this work was to examine the effect of anthropogenic noise on the calling behaviour of a sizeable non-passerine bird like the Little Bustard across a gradient of road traffic noise and in relation to male position within the lek. Using directional recordings and noise mapping, we determined between- and within-individual variation in call traits and their relationship with noise level and frequency at both spatial (variation of noise according to the position of the calling males within the lek) and temporal scales (fine temporal variation of noise experienced by individual males just before each call). 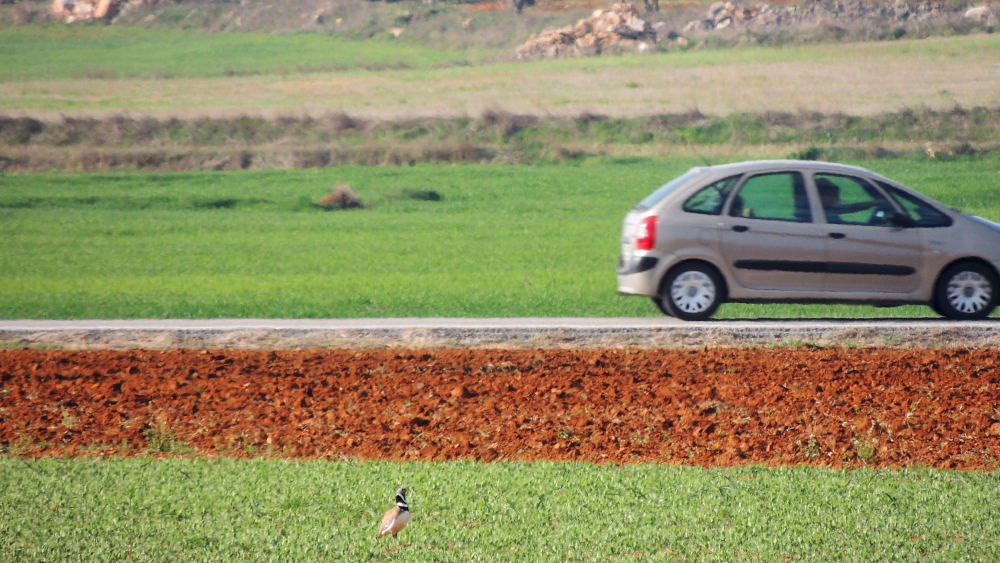 Little Bustard males increased their call rate at sites exposed to higher average noise levels and at those sites located further from the nearest neighbour within the lek, whereas temporal changes in noise showed no effect on call rate. In contrast, call duration decreased with relative increases in noise level prior to each call, and was not affected by spatial changes in noise. Peak call frequency showed no significant variation over time or among sites. Our findings revealed that, despite their supposedly limited vocal learning, Little Bustards may be capable of fine-scale vocal adjustment, which implies some capacity to cope with anthropogenic noise. However, the lack of frequency shifts suggests behavioural constraints that may compromise communication, as Little Bustard males use low-pitched calls. Our study provides some clues as to how large non-passerine birds producing low-frequency calls may adjust their vocal sexual display in the face of increasing noise pollution of farmland and suburban habitats.