The migration of Barn Swallows breeding in Spain

Revealing the migratory routes, migration schedules, stopover and wintering areas
The bulk of migratory birds that perform regular annual movements between breeding and wintering grounds constitute a strong ecological link among continents (Kays et al. 2015). Beyond this intrinsic scientific interest, it is required to know the whereabouts of migrants year-round before designing effective management decisions (Faaborg et al. 2010). Indeed, many migratory bird species are declining in population numbers, such as our study species the Barn Swallow Hirundo rustica.

Most migratory bird species are passerines; nevertheless, detailed information on bird migration is strongly biased towards raptors and waterbirds (Kays et al 2015). This gap in knowledge is led by body size, which traditionally has made the attachment of satellite transmitters on to small birds impossible. Thank to light level geolocators, this knowledge gap has been rapidly bridged in recent years (McKinnon et al. 2013). These are very small devices which record light levels at fixed time intervals and once the tagged individuals have been recaptured, latitude and longitude can be estimated following astronomical equations and statistical methods.

In this study, we used light-level geolocators to unravel the migratory performance of Barn Swallows breeding in the southwestern Iberian Peninsula. First, we reconstructed the migratory tracks of our study individuals, we then determined their migration schedules, and finally we identified the stopover and wintering areas used by our study population.

We monitored five breeding colonies of Barn Swallows in the provinces of Badajoz and Seville. From May to June 2016, 2017 and 2018, we captured adult Barn Swallows with mist nets and deployed, respectively, 64, 59 and 55 geolocator devices using leg-loop harness. In 2017, 2018 and 2019, we recaptured, respectively, 21, 8 and 16 tagged birds. Five of these tags did not provide any useful data and two individuals had lost the geolocator upon recapture. Thus, we were able to reconstruct 38 full migratory routes from the light data. For this purpose, we used the state-of-the-art R package FLightR (Rakhimberdiev et al 2017). 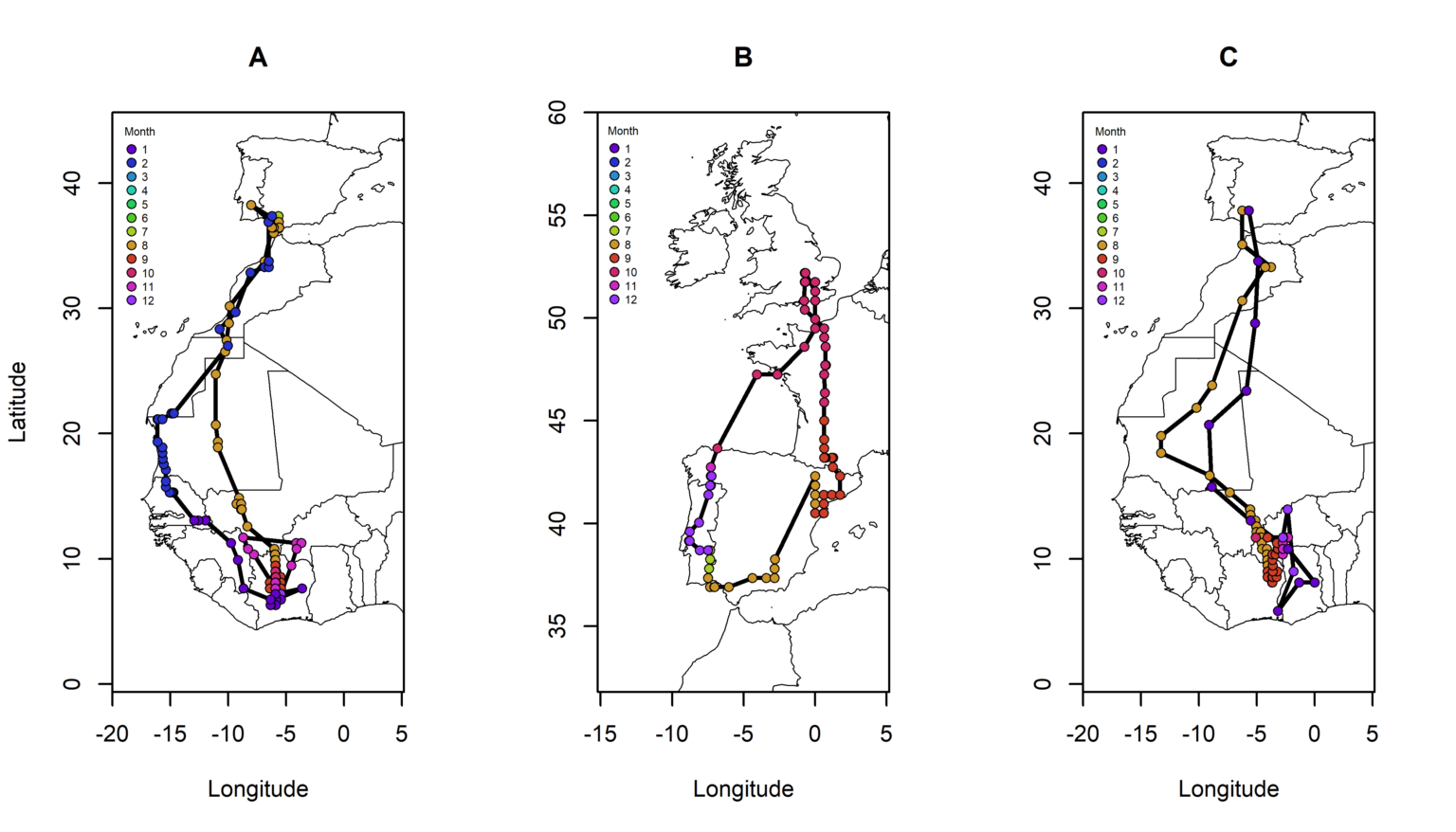 
Our study Barn Swallows spent on average 22 days (Figure 2) wandering through southern Spain and northern Morocco (Figure 3A), a period that we defined as “pre-migration”. Then, they started to travel steadily southwards on average on the August 18th, stopping over to refuel in northern Morocco and southern Mali (Figure 3B), taking 16 days to reach the wintering grounds. Wintering areas were found mainly in Ivory Coast and surrounding countries (Figure 4), in localities dominated by savannahs, grasslands and crops. The wintering period took on average 145 days, from September 3rd to January 26th, when the tagged birds started to move steadily northwards. During spring migration, the majority of individuals stopped over to refuel across Senegal and Mauritania (Figure 3C), taking 23 days to reach their breeding colonies, on February 18th on average.

An exceptional individual migrated northwards in autumn, taking almost two months to reach England (Figure 1B). It remained there for two weeks and then it travelled back to Spain, taking 8 days to arrive to Galicia. Here this swallow overwintered from October 29th to December 18th, and finally it got to Badajoz on Christmas Eve. 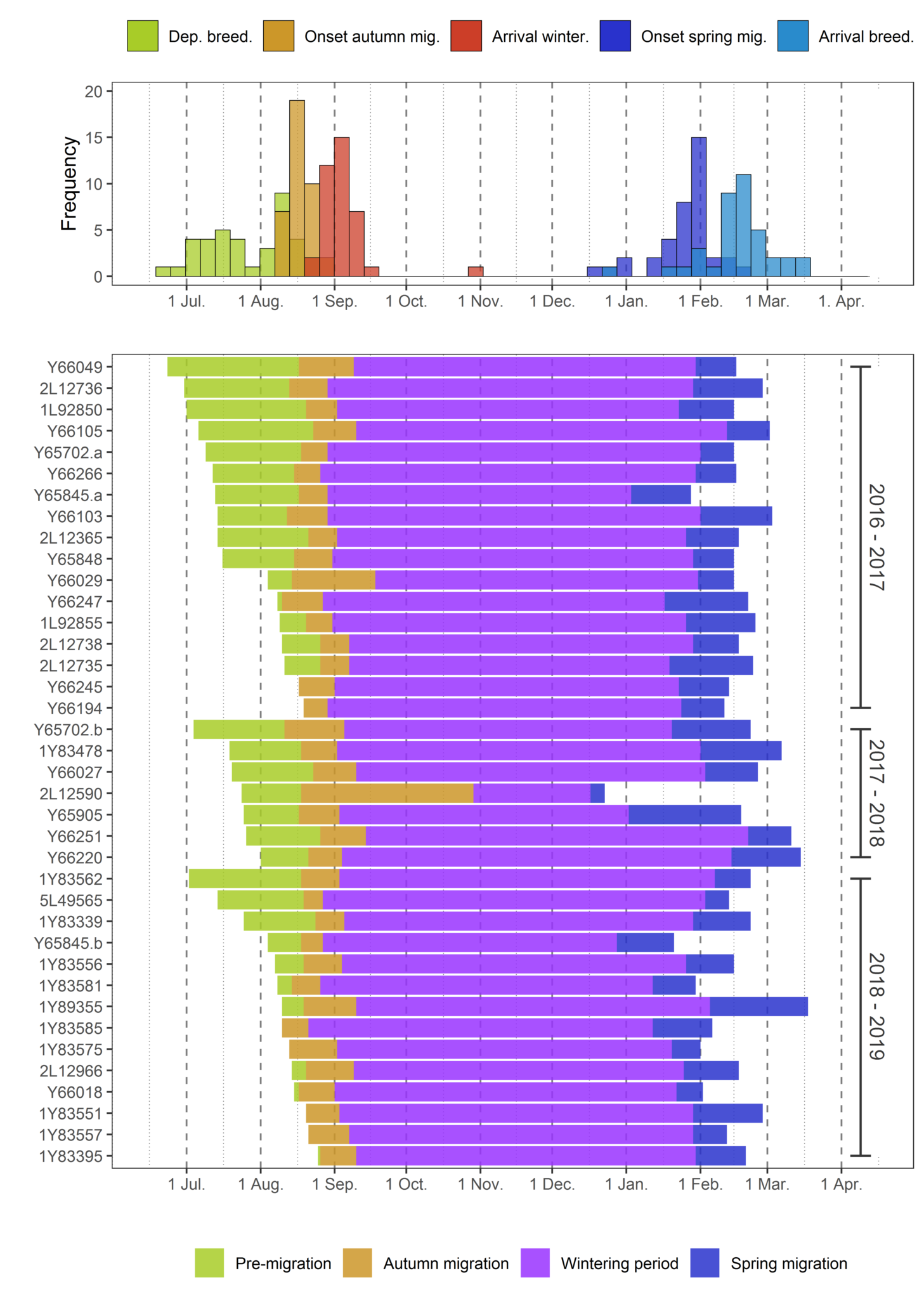 The identified stopover areas in Morocco and Senegal represent the last patches of suitable habitats that Barn Swallows used to increase fat loads before crossing the Sahara desert in the autumn and spring migration respectively. On the other hand, the stopover areas identified in Mauritania during the spring migration may represent certain oases used to refuel and to recover from fatigue while crossing the desert. 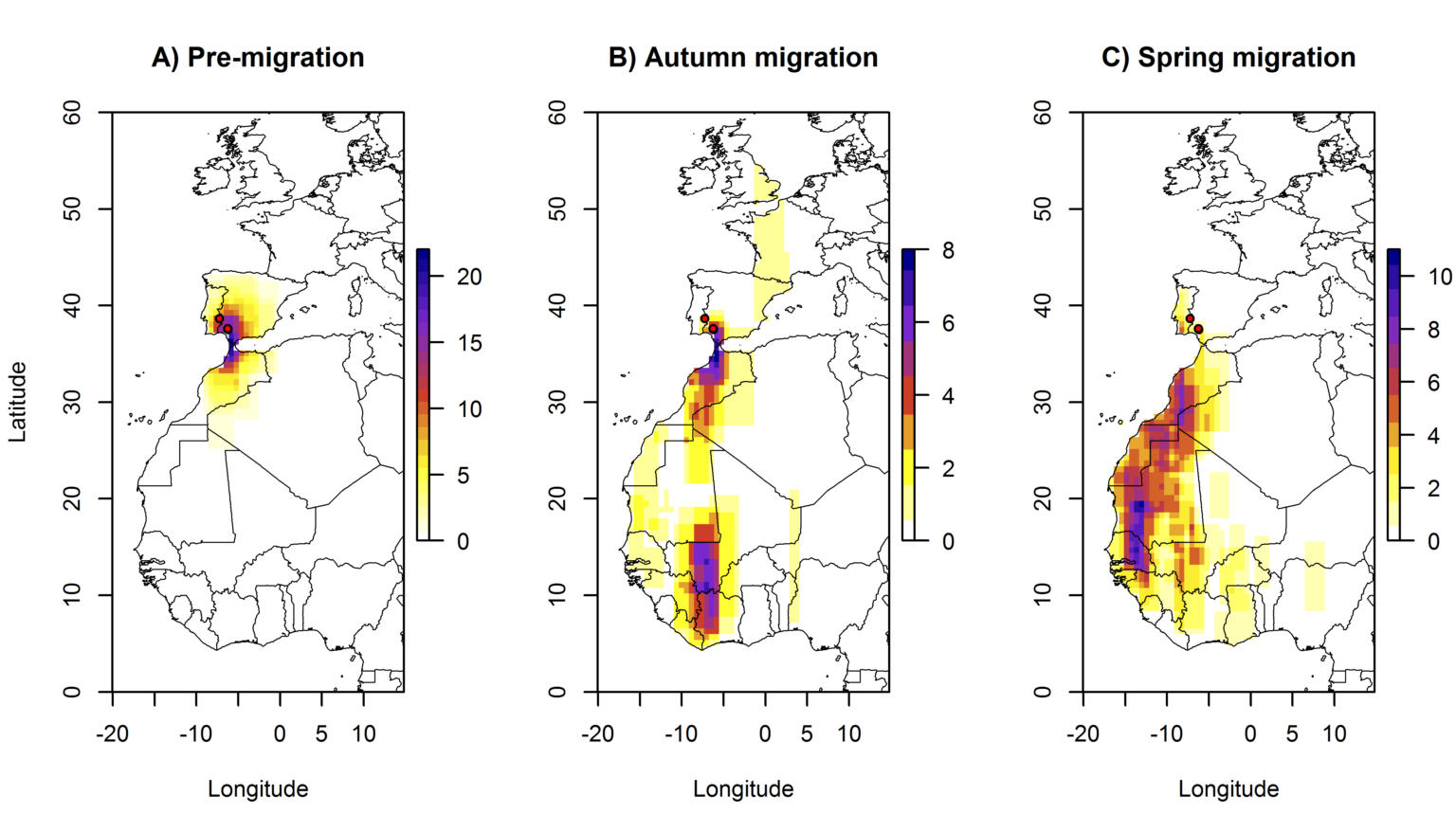 Figure 3 Stopover areas used by our study population during pre-migration (A), autumn migration (B) and spring migration (C). Colours indicate the number of birds that were located at the specific pixel. Stopover areas for each individual were defined as error squares of stopover locations. Breeding colonies are denoted by red dots.

The wintering areas we identified across West Africa are similar to wintering areas identified for many other trans-Saharan migrant species (Walther & Pirsig, 2017). Clearly, the importance of these wintering sites requires consideration when proposing measures for the conservation of Palearctic migrants.

Figure 4 Wintering areas used by our study population. Subfigures show different spatial scales used to define individual winter areas: grid points that accumulated more than 50% (A), 75% (B) and 95% (C) of probability of occurrence during winter. Colours indicate the number of birds that were located at the specific pixel. Breeding colonies are denoted by red dots.

Finally, the large variance we found here for departure date from wintering areas and arrival date to breeding areas may help to explain carry-over effects from the winter to the breeding stage. Since some swallows arrive at their breeding colonies much earlier than others do, they should experience benefits in subsequent reproduction.